Since this is better than doing schoolwork and the internet does not know enough about me. Email chain questionnaire from 2002, minus a few stupid questions and answers I would rather not put out there for the world. 30 minutes of my life I will never get back. Great, great, grand kid, now you know me a little better <3


Name: James Draper
Nicknames: JD
AGE: 28
Birthplace: Raleigh, NC
Current Location: Raleigh, NC
Siblings: Sister
School: Appalachian State University and NC State University
Grade: ummm, 18th?
GPA: 3.75
Occupation: Business Manager
Car:  Chevy
Pets: The nutty squirrels outside
Hair Color: Brown
Eye Color: Brown
LAST CD YOU BOUGHT: ummmm, its been like 5 years since I have purchased a real CD
LAST MOVIE YOU SAW IN THE THEATER: The Avengers
LAST MOVIE YOU RENTED: watched something on Netflix
FAVORITE SUBJECT IN SCHOOL: Political Science
DO YOU ACTUALLY LIKE MATH?:  A little
Fav. Car: Aston Martin
Dream House: Plenty of space
Fav Movie: Schindler's List
Fav. Food: Seafood
Fav. Sport: basketball
Fav. Hang-Out: I'm not 15 anymore....
Fav. Words or Phrases: wow
Do You Have A Sweetie?: yes
Do You Have Any Crushes?:  ^^^
Have You Ever Kissed: thankfully
Who's The Last Person U Talked To:  Ellen
Who was the last person you saw:   Ellen
What're You Wearing:  polo shirt, jeans, sperry's
What Is Your Pet-Peeve?: ignorance
What's Your Favorite Body Part On The Opposite Sex: PG-13
In 4 Words, Describe Yourself: whitty, intelligent, loving, super-awesome
FAVORITE ACTRESS: Natalie Portman
FAVORITE ACTOR: RDJ is the man
FAVORITE TV SHOW: LOST
FAVORITE SONG:  <3 Taylor Swift
FAVORITE STORE: Best Buy?
DO YOU DO ANY DRUGS?   Negative
HOW MANY PEOPLE ARE ON YOUR BUDDY LIST? omg, my buddy list. AIM no longer exists  :p  I have a lot of Facebook friends?
ARE YOU ON ANY SPORTS TEAM?  Nope
HOW LONG ARE YOU IN THE SHOWER? 10 minutes.  <3 showers
FAV. FOOD: pizza
WORST FEAR: losing people
FAVORITE COLOR:  blue
BEST FEELING IN THE WORLD?  Love and discovery
WORST FEELING IN THE WORLD?  helplessness & misery
BILL CLINTON: good times
LOVE AT FIRST SIGHT:  yeppers
ABORTION: curcumstancial
RAP:  fine
MARILYN MANSON: was he relevant back then or something?
GUY BANDS:  OMG, BSB 4 LIFE
SPICE GIRLS: fun
TITANIC:  Its in 3D now....
JERRY SPRINGER:  Is the show still on? Quick google search.... yes, since 1991
GOD:  Love
DO YOU HAVE A JOB? thankfully
WHAT COLLEGE DO YOU GO TO OR WANT TO GO TO? This is my second one
DO YOU BELIEVE IN HEAVEN AND HELL?: yes
DO YOU BELIEVE IN ANGELS?  yes
DO YOU BELIEVE IN ALIENS? yes
DO YOU BELIEVE IN YOURSELF? for sure
DO YOU WANT TO GET MARRIED? yes
WHAT DO YOU DO THAT MAKES YOUR FRIENDS MAD? act like an ass
DO U HAVE STUFFED ANIMALS? of course
DO YOU HAVE ANY BAD HABITS? probably
PEPSI OR COKE? Sprite
LETTERMAN OR LENO: either
MTV or VH1: MTV
SPICE GIRLS OR ALL SAINTS? Who?
BEVERLY HILLS 90210 OR DAWSONS CREEK:  such a tough decision....
7TH HEAVEN OR PARTY OF FIVE: ^^^^
CHOCOLATES OR FLOWERS: Flowers
VANILLA OR CHOCOLATE: Vanilla
BLACK OR WHITE: White
SILVER OR GOLD: Silver
IF YOU COULD BE ANYWHERE RIGHT NOW, WHERE WOULD YOU BE? tropical island, taking a nap
WHAT ARE YOU THINKING AT THIS VERY MOMENT? <---- stupid question
WHAT DO YOU THINK OF THE SONG "PRETTY FLY FOR A WHITE GUY"?  <3 offspring
ARE YOU A VEGETARIAN?  no
FAVORITE KINDS OF CLOTHES: comfortable ones
THE LAST TV SHOW YOU WATCHED: Chopped!
HAVE YOU EVER....
BEEN ON A PLANE:  yes
WENT SWIMMING IN THE OCEAN: yes
GONE SKINNY DIPPING: ish
CRIED IN PUBLIC:  yes
LET A FRIEND CRY ON YOUR SHOULDER: yes
FELL ASLEEP IN THE SHOWER/BATH: no
FELL ASLEEP WHILE EATING: no
GONE TO CHURCH: yes
READ THE BIBLE: yes
CLIMBED A TREE:  yes
WATCHED DAWSON'S CREEK: yes
GONE SKIING:  nope
GONE SNOWBOARDING: yes
FELL ASLEEP DURING A SCARY MOVIE: nope
BEEN TO CAMP: yes
PLAYED SOCCER: yes
BEEN TO A MAJOR LEAGUE BASEBALL GAME? Boston Red Sox
SAW A PRO BASKETBALL GAME: in Charlotte, maybe?
SAT IN A RESTAURANT WITHOUT OUT ORDERING ANYTHING: yes
EATEN SUSHI: yes
EATEN FISH:  yes
WANTED TO DIE:  no
MET A CELEBRITY: maybe?
DRIVEN A CAR: yes
DIDN'T WASH YOUR HAIR FOR A WEEK: no
BROKEN SOMETHING VALUABLE:  yes
BOUGHT ICE CREAM FROM AN ICE CREAM TRUCK:  yes
USED YOUR PARENTS CREDIT CARD: yes
BEEN SCARED TO GET A SHOT: probably
GOTTEN A CAVITY: yes  :(
SHOPPED AT ABERCROMBIE & FITCH:  yes
SHOPPED AT OLD NAVY:  yes
THOUGHT YOU WERE IN LOVE: knew
HAD AN ONLINE RELATIONSHIP:   nope
WATCHED MTV AT 4 IN THE MORNING:  probably
HAVE YOU EVER TIPPED OVER A PORTA POTTY: no comment....
MADE PRANK PHONE CALLS?  ^^^^
CAUGHT A FISH: yes
SNUCK OUT OF YOUR HOUSE: nope
BEEN HURT BY A GUY/GIRL YOU LOVED: yes
GONE TO ANOTHER COUNTRY: yes
WET THE BED: probably
SEEN A SURVEY THIS LONG: for the love of all things holy


What are you listening to right now?  nothing
What was the last thing you ate? or drank? water and chicken and cookies and bow-tie pasta
If you were a crayon, what color would you be? hue of blue
Where do you plan to go on your honeymoon? warm, tropical, secluded, oceanie
What is the weather like right now? warm and sunny
Who was the last person you talked to on the phone? my sweet mother
What's the first thing you notice about the opposite sex? the whole package (or whatever tends to stand out)
How are you today?  glad its friday
Your favorite drink? Water
Your favorite alcoholic drink? Red Oak
How do you eat an Oreo? I don't
Favorite sport to watch on TV?  Basketball and Football
What's the next CD you're going to get?  Never again
Do you wear contacts? yes
Favorite month?  January
Favorite day of the year? Christmas
Are you too shy to ask someone out? it depends
Do you like scary or happy movies better?  happy
Summer or Winter?  both
Hugs or Kisses? kisses
Relationship or one-night stands?  both?  :p
Weird facts about you? This is stupid 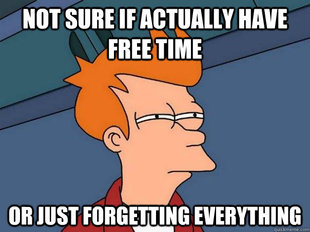 I forgot how to blog

Yes, I no longer know or remember how to blog.  I am so used to shrinking my ideas and thoughts down to 140 characters or short posts on facebook.  What do people blog about now-a-days anyway?  My friend's already know 85% of what I do because of facebook and twitter.  Am I supposed to give them more details?

I began blogging on Livejournal, way back when, before twitter and facebook existed.  Back when MySpace was the bomb and everyone communicated through AIM.  Thanks to the ever knowing internet, that journal is still live and public.  I have to be careful if I ever run for office one day and be weary of what my grandchildren might ask me.

It looks like I used LJ from 2003-2007 and posted almost 800 times, mostly about my life, school, the news, and anything I found interesting.  After that, I spent a little time on wordpress from 2008-2010, so it has been a while since I have actually had to think more than five seconds when I post something out to the world. 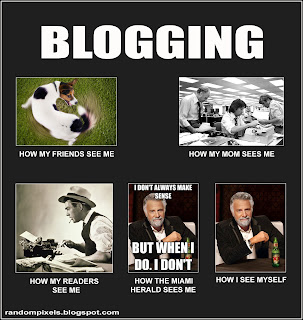